1 in 6 Irish people in poverty - not good enough!

A new study released today by the CSO reminds us that despite our improved economic performance, one in six Irish people are still living in poverty.

Among the facets of Ireland’s poverty rates highlighted in the CSO's report are:

Measuring Ireland’s Progress 2016 is the fourteenth in the series and aims to provide an overall view of the social, economic, environment, education and health situation in Ireland. Such indicators are a welcome reminder that while Ireland’s economy is doing very well by a number of measures, Ireland as a society still has many issues that need addressing.

While Ireland’s overall poverty rate is slightly below the EU-average, it exceeds that of almost every country that we should be comparing ourselves to. With respect to the countries of the former Soviet bloc, many of whose poverty rates far exceed ours, they are not the countries we should be modeling ourselves on, or aspiring to emulate. A poverty rate of 16.6 per cent is still higher than Ireland has achieved in the past and is not acceptable in a wealthy and well-developed country.

Another area where Ireland performs poorly is in relation to young people in employment. Around one in six people (15.9 per cent) 18-24 in Ireland in 2016 were neither in employment nor in education and training. This is known as the NEET rate. The EU-average NEET rate was 15.2 per cent, but in many instances Ireland trailed our peer countries by large gaps. The Netherlands (6.1 per cent), Denmark (7.7 per cent), Luxembourg (8.3 per cent) and Sweden (8.7 per cent) were among the best performers.

This report is particularly timely as we approach the Summer and talk turns more and more to Budget 2019. The Budget is one of the means by which Government can address the needs of society and indicate its priorities.

Social Justice Ireland believes that these are two areas which need immediate addressing. It should be a national priority to provide all with sufficient income to live life with dignity. If poverty rates are to fall in the year ahead, the following are required:

These and other issues are addressed in our recently released Povety Focus. 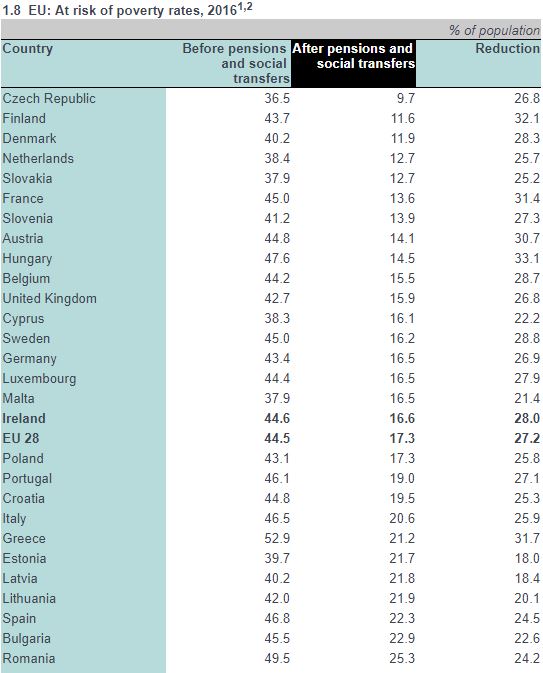 Where Ireland has been doing well:

Where Ireland has been doing well but needs to improve:

Waste sent to landfill in Ireland dropped by 70% between 2004 and 2014. However, we still landfill just over a fifth of municipal waste which, although below the EU average of 24 per cent, pales in comparison to the performance of Sweden and Belgium where the figure is less than 1 per cent.

Where Ireland needs to do much better:

Ireland's Official Development Assistance was 0.32 per cent of GNI (or 0.38 per cent of GNI*) in 2016. This has been falling significantly for years. It is now significantly below the UN-agreed 0.70 per cent target and well behind countries such as Luxembourg, Sweden, Denmark and the United Kingdom who all meet this target every year, as well as countries like Germany and the Netherlands who do so (or come very close) on a regular basis.

Ireland has never exceeded 0.59 per cent. 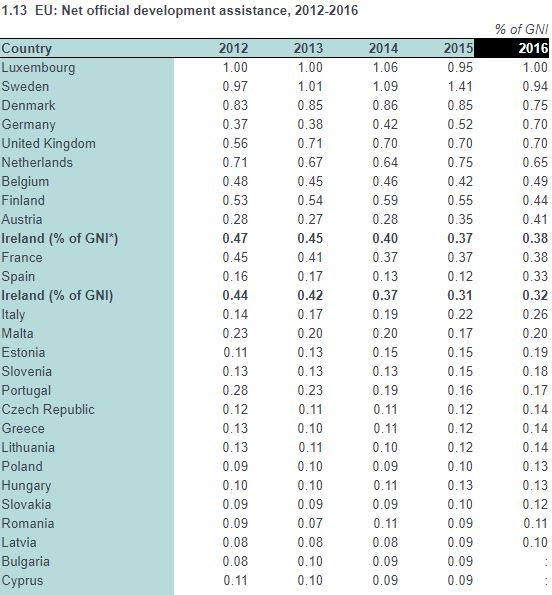