A 5-point framework for the next Programme for Government

Practically all of the commentary surrounding the negotiation of a policy programme for the next government has been about COVID-19 and its repercussions. This is both understandable and necessary: laying the foundations (both now and when the crisis beings to dissipate) for an economic recovery is a key step towards achieving the broader social goals which the next government should have on its agenda.

Information emerging from the negotiations thus far indicate that the main parties of the next government understand that austerity-type measures of the kind witnessed after the financial crash of 2008/09 will not be tolerated by the Irish people. More importantly, such measures are neither necessary nor appropriate. Sharp reductions in government spending a little over a decade ago, and an aversion among policymakers at a national and supranational level to providing economic stimulus, resulted in an unnecessarily prolonged recession that led to greater suffering for ordinary Irish people who did nothing to cause it. This time around, whether it comes in the form of an Irish sovereign bond issue, quantitative easing by the European Central Bank, or so-called Corona Bonds, the necessary funding to provide cheap stimulus is available

However, it is important that the eventual content of the forthcoming Programme for Government is driven by an understanding of the other major challenges that Ireland faces. The priorities contained within it will have major impacts on our standard of living, on the types of public services we have access to, and the type of society in which we live.  How the Programme tackles Ireland's crises in policy areas like health, housing, and the climate will shape the future for a long time to come.

The results of the General Election in February this year indicated that ‘business was usual’ was no longer an option for policymakers. The onset of the COVID-19 outbreak has, if anything, merely served to cement this. In circumstances of great upheaval such as those we are now living through, lessons must be learned. COVID-19 has exposed afresh the depth of the inequalities within and between countries, but also shone a light on what is possible when political will exists. It will re-contextualise how people view society and cause many to look afresh at the possible role of the State in service delivery and its interventions in various policy areas. It is important that current feelings of common purpose are harnessed to shape the society that will follow when this crisis subsides.

Social Justice Ireland has been saying for several years that the issues that face Ireland cannot be solved in a single term of government. The current crisis has served to underline this. But by making the right choices the next government can get a long way down the road to delivering a fairer society with a better standard of living for everyone. Social Justice Ireland believes that the next Programme for Government must deliver on five key policy goals:

One of the first priorities of the next government will be to revitalise the economy after the unprecedented move to shut down huge sections of it in response to the pandemic. Policies such as the temporary wage subsidy and the COVID-19 Pandemic Unemployment Payment will help to support living standards and maintain connections between employers and employees during the shut-down. They are very welcome moves, and the current government should be commended for acting so decisively. However, other stimulus measures are likely to be needed in the coming months as society returns to something resembling normality. It is important Government is not hindered in these efforts by measures such as the Stability & Growth Pact.

A vibrant and sustainable economy generates the resources needed to deliver a fair society. It will provide the funds for the increased public spending necessary to improve public services and social infrastructure, which is the second key area that government must deliver upon.

There must be a commitment to public investment if we are to close the deficits Ireland experiences compared to our peer countries of western Europe. These deficits relate to, among other things, housing, healthcare, public transport, and childcare. Ireland must also address our high levels of income inequality and create more regional balance.

The next Government should begin putting in place the foundations of policies that ensure that there is a minimum floor of services and income that everyone in society is entitled to. Much has been written lately of the role that Universal Basic Services (UBS) and Universal Basic Income (UBI), both in the context of the current pandemic and the aftermath. The two policies are complementary – with UBS serving the reduce the level of UBI payments needed to secure a decent standard of living – and would serve to underpin a system where everyone in society has the services and resources to live life with dignity.

The next Government will need to set many social, economic and environmental goals, and so it is important that tax policy supports these goals. A just and fair taxation system is a must if we want more public investment, better services, and a vibrant economy.

What gets taxed, how it gets taxed, and how heavily it is taxed, has long been one of the great debates of political economy. As previously alluded to, the COVID-19 pandemic has served to shine a light on traditional ways of doing things and caused people to question how society is structured, who the essential service providers are, and what products and services and fundamental to societal wellbeing. This is a very positive thing. Social Justice Ireland has, for years, pointed out the extent to which Ireland’s tax take as a proportion of national income has long trailed that of our European peers, as well as ways the system can be made fairer. Ireland’s tax take must increase in the direction of the European norm. Projections for national income and taxation per capita, as well as reference to previous norms of revenue raising, are next to impossible under the current circumstances. Tough decisions regarding revenue raising measures will have to be taken. We suggest beginning by targeting the following areas:

Indeed, putting sustainability at the heart of what we do is the only way to ensure we can move to a cleaner, greener economy without leaving anyone behind. Ireland is a self-confessed laggard when it comes to our climate and environment-related goals. The next government has a significant task on its hands to steer Ireland towards meeting our international targets, and ensuring a just transition in how we run our society. Sustainability is also about more than the environment: it is about economic and social wellbeing, and will require bridging the income and services divide between urban and rural Ireland and ensuring rural communities are not left behind.

Finally, people need to trust that Government will deliver a fairer society, and that their voice will be heard. People should have a real say in the decisions that affect them. Real social dialogue involving all stakeholders is vital if we are to meet the challenges presented by climate change, demographic changes, and social inequality, as well as the aftermath of the current pandemic. A framework for social dialogue is required to create sustainable solutions that all sectors of society can buy into.

Ireland faces many challenges, but they are not insurmountable. There are many radical reforms that need to be on the table for discussion, including ideas like basic income, universal basic services, and new forms of wealth taxation. Policymakers can no longer ignore the need for a more active role for government in the economy. It is time our political leaders truly viewed public services as investments rather than liabilities.

Social Justice Ireland has published a framework for the next Programme for Government, focusing on the five key areas noted above. Below, we set them out in tabular form. Further policy suggestions in each of these areas are published in our annual Socio-Economic Review, availabe here. 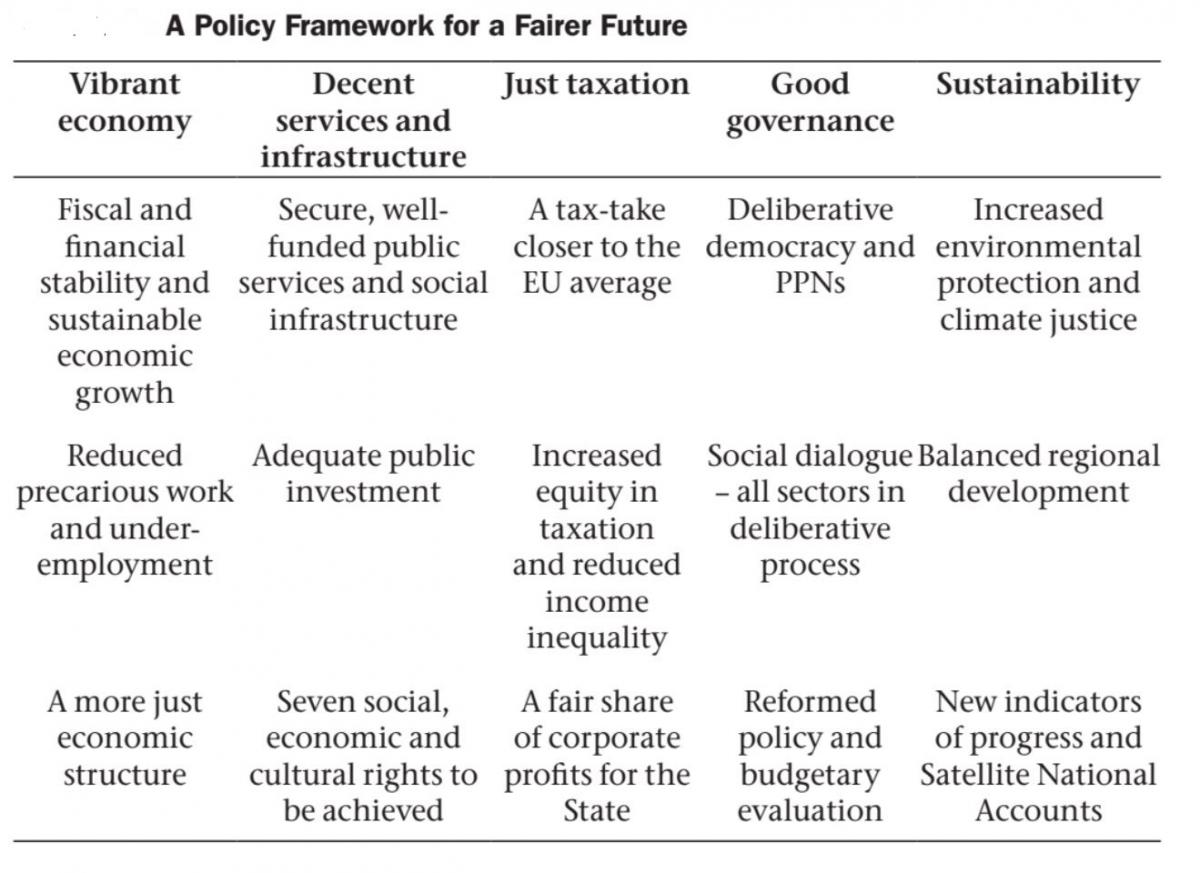