The latest release from Eurostat (21st May 2019) shows that Ireland had the highest increase in gas prices, and the fifth highest increase in electricity prices in the EU.  According to the EU SILC, the proportion of the population that went without heating due to lack of money rose from 5.8% in 2006 to 15.7% in 2013-14, before decreasing year on year to 2017 (Chart 1).  In 2017 the proportion of the population experiencing this form of enforced deprivation was 8.1%, or 393,417 people.

Chart 1:  % Population without heating at some stage in the last year through lack of money by poverty status, 2006-17 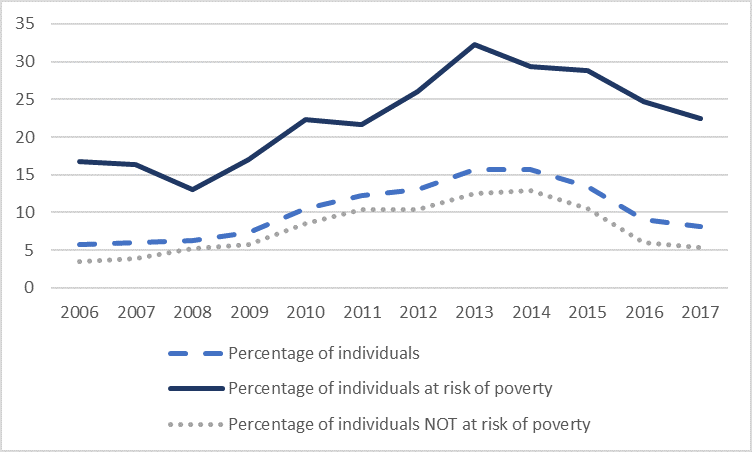 Another EU SILC indicator quantifies the proportion of the population consistently unable to keep the home adequately warm.  Following a similar trajectory to those who were without heating at some stage in the last year, the proportion of the total population experiencing this type of deprivation in 2006 was 3.8%, rising to 10% in 2013 where it peaked during this period (Chart 2).  In 2017 this had reduced to 4.4% of the total population, or 213,708. 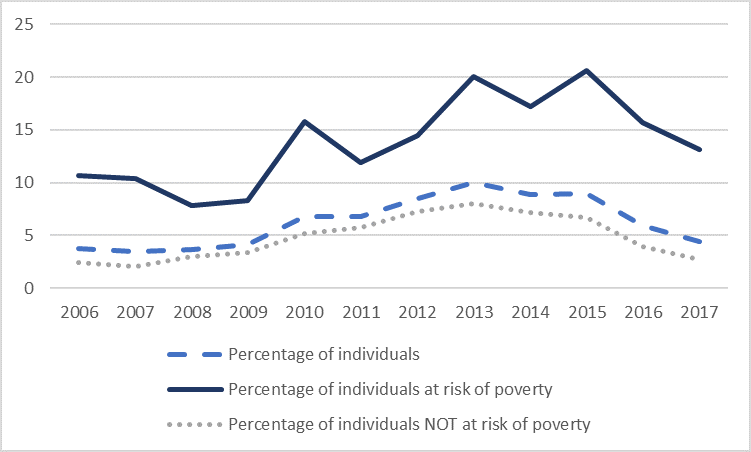 In 2011 the Government published its first energy poverty strategy Warmer Homes:  A Strategy for Affordable Energy in Ireland, and in 2016, the then Department of Communications, Energy and National Resources published A Strategy to Combat Energy Poverty 2016-2019.  Both strategies set out a vision of eliminating energy poverty and contained actions to move towards energy efficiency.  However, the grant schemes introduced to retrofit older, less energy efficient homes can be difficult to access for low income households who must pay the upfront costs themselves before being reimbursed from the schemes on completion of works.  There are also few incentives for landlords to retrofit rented properties, with a 2017 report from Threshold estimating more than 55% of private rented homes have a low energy rating, contributing to the fuel poverty of private tenants.

Increases in energy costs disproportionately affect those on low incomes, but are having an impact on a large number of the general population.  Social Justice Ireland urges Government to take serious action in tackling fuel poverty by: