Austerity is Not Working

Since 2008 successive Governments have pursued an austerity policy which has included deficit-cutting, lower spending, a reduction in the benefits and public services provided by the State coupled with increases in taxes but not on the corporate sector. This austerity approach is not working.

This approach is aimed at reducing Ireland’s borrowing and providing the finance to pay back creditors, thus reducing Ireland’s debt. This debt, however, was not Ireland’s sovereign debt. Rather, it was a debt incurred by banks and financial institutions which was taken on by Ireland’s Government when it agreed to fully reimburse these banks and bondholders who had taken risks, invested recklessly and lost their investments with the collapse of 2008.

Budget 2012 marked the seventh fiscal adjustment to the Irish economy since the beginning of the current economic crisis in 2008. Following the increases to taxes and decreases in public expenditure, the total adjustment to date has risen to almost €24.5 billion - equivalent to 15% of GDP which has been directly removed by government from the economy. Of course, the knock-on implications of these adjustments have removed additional economic activity from the economy explaining the large overall drop in GDP since 2007.


Based on the plans outlined in November’s Medium Term Fiscal Statement, the Government intends to remove a further €8.6 billion from the economy over three Budgets from 2013-2015. If these plans are implemented, the overall sum of the adjustments from 2008-2015 will total €33 billion - equivalent to 18% of the GDP forecast for 2015. The details are set out in table 1.

The implications of these large and harsh adjustments is visible in

o    the continued extension of the adjustment plan,

o    the sustained increases in unemployment and

o    the lack of confidence domestically and internationally in the Irish economy’s recovery.

Reflecting this, chart 1 presents the Governments data on the expected composition of economic activity in Ireland in 2012. It shows that all sectors of the economy continue to contract with the exception of exports. As spending cuts and tax increases take effect, households are spending less, investment is falling and it is only export growth (entirely driven by non-domestic demand factors) that is pulling the economy out of recession. 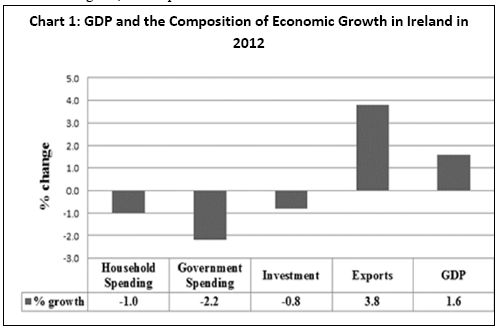 An obvious question arises regarding the sustainability of this policy approach. Social Justice Ireland believes that Government needs to adopt policies to stimulate the economy rather than continually run it down. Domestic demand should be given a chance to recover through policies which promote government or European Investment Bank led investment while further building domestic economic confidence through addressing the unemployment crisis via, for example, Social Justice Ireland’s Part-Time Job Opportunities proposal to take 100,000 people off the dole queues.