The full cost to Ireland of the COVID-19 pandemic is as yet unknown.  Our unemployment rate was 16.5 per cent in March 2020 and the Stability Programme Update (SPU) estimates a possible general government deficit of €23 billion this year; and the Exchequer receipts for March 2020 were almost €1 billion lower than March 2019.  Social Justice Ireland recently published our briefing on policy options for Ireland’s Taxation System post-COVID 19.  Here we explore one option in particular, an increase in Corporation Tax.

Over the past few years there has been a growing international focus on the way multi-national corporations (MNCs) manage their tax affairs. The OECD’s Base Erosion and Profits Shifting (BEPS) examination has established the manner and methods by which MNCs exploit international tax structures to minimise the tax they pay.  Similarly, the European Commission has undertaken a series of investigations into the tax management and tax minimisation practices of a number of large MNCs operating within the EU, including Ireland. The European Parliament’s Special Committee on Tax Rulings has also completed a review of the EU tax system and highlighted its problems and failures[1].

Notwithstanding that we are in the midst of a global pandemic, given the timeliness and comprehensiveness of this work, it is important that it leads to the emergence of a transparent international corporate finance and corporate taxation system where multinational firms pay a reasonable and credible effective corporate tax rate.

This is not a new issue.  A chapter within the 2016 Report of the Comptroller and Auditor General provided a welcome new insight into corporation tax receipts in Ireland[2]. The report was the first comprehensive examination of this area for some time, even though corporation taxes comprise around 15 per cent of annual tax revenue. Looking at tax receipts for 2016 it found that there were 44,000 corporate taxpayers but that receipts were dominated by “a small number of taxpayers, mainly multi-national enterprises (MNEs)” (2017:289). Noting the fiscal risk associated with this, the report indicated that 37 per cent of the 2016 corporation tax was paid by the top 10 taxpayers and 70 per cent by the top 100 taxpaying companies. Four sectors accounted for 84 per cent of the €7.35 billion in revenue collected in 2016 and these were: financial and insurance activities (28 per cent); manufacturing including pharmaceutical manufacturing (25 per cent); information and communications (17 per cent); and wholesale and retail trade (14 per cent). The report noted that the three largest of these are sectors “dominated by MNEs” (2017:291).

Despite a low headline rate (12.5 per cent), to date there has been limited data on the effective rate of corporate taxation in Ireland. A report from the Department of Finance in 2014 explored the issue and the C&AG provides a more detailed assessment. Using the approach used by the Revenue Commissioners to calculate the effective tax rate, tax due as a proportion of taxable income, they found an overall effective corporation tax rate of 9.8 per cent in 2016. The effective rate varied between sectors and the C&AG findings are summarised in Chart 1. The C&AG findings for the effective rate among the top 100 corporate taxpayers, who account for 70 per cent of tax revenue, is summarised in Table 1. 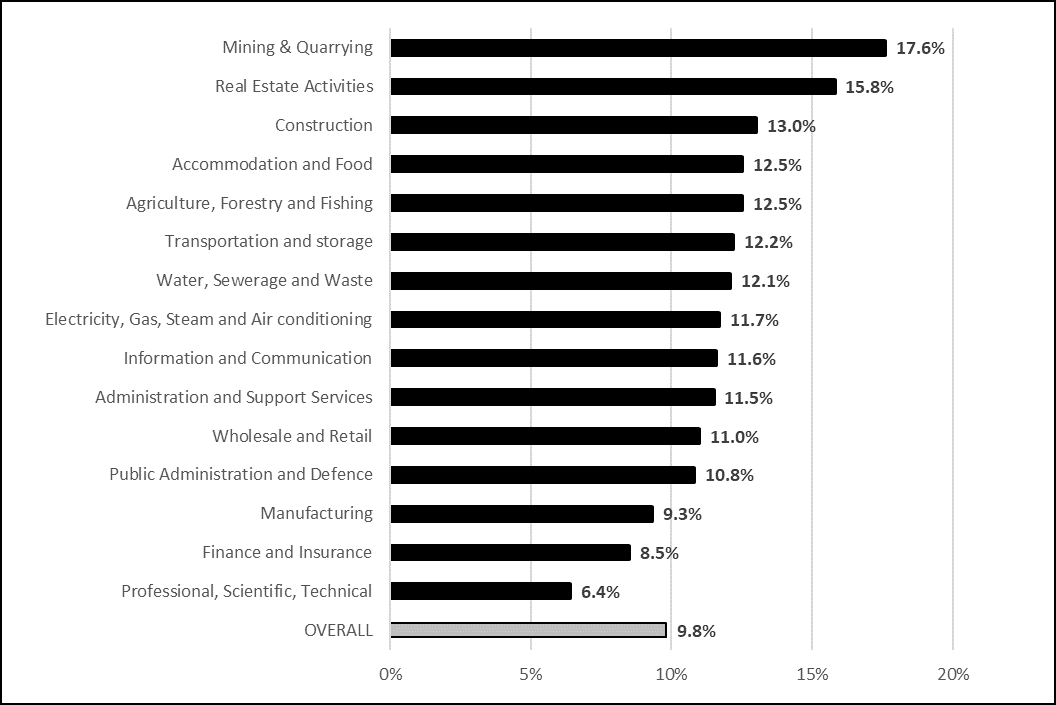 Note: Effective tax rates can exceed the statutory rate of 12.5% where there is income beyond trading profits such as passive income which is charged at 25%.

Overall the C&AG report points towards a concentration of corporation tax among a small group of multi-national firms and highlights that it is a small number of these firms who are aggressively minimising their tax liabilities.

In a post-COVID-19 environment, it is likely that addressing the tax challenges of the digitalisation of the economy and ensuring that MNCs pay a minimum level of tax will be of even greater importance.  The OECD notes that rising pressure on public finances may strengthen the push for a minimum effective corporate tax rate and that there will be a need to ensure that there is a level playing field in the levels of effective taxation between major MNCs and SMEs who may suffer disproportionately from the crisis[3]. As the international tax landscape changes and there is a renewed focus on the international corporate tax system, the introduction of a minimum effective corporate tax rate would serve as another opportunity for Ireland to take a leadership role in implementing progressive moves relating to the international corporation tax system.

Social Justice Ireland therefore believes that an EU-wide agreement on a minimum effective rate of corporation tax should be negotiated and this could evolve from the discussions around a Common Consolidated Corporate Tax Base (CCCTB). We believe that the minimum rate should be set well below the 2018 EU-28 average headline rate of 21.9 per cent but above the existing low Irish level.  A move towards a headline rate of 17.5 per cent and a minimum effective rate of 10 per cent seems appropriate. This reform would simultaneously maintain Ireland’s low corporate tax position and provide additional revenues to the exchequer. Based on the C&AG report the impact of such a reform would be confined to a small number of firms yet it is likely to raise overall corporate tax revenues. Rather than introducing this change overnight, agreement may need to be reached at EU level to phase it in over a period of time. In advance of Budget 2020, we proposed that the effective rate be adjusted to a minimum of 6 per cent – an opportunity regrettably missed.

Social Justice Ireland believes that the issue of corporate tax contributions is principally one of fairness. Profitable firms with substantial income should make a contribution to society rather than pursue various schemes and methods to avoid such contributions.