Earlier this year, the Government announced that income tax revenues for 2020 were only down 1 per cent compared to 2019. Preliminary estimates for Q4 2020, set out in the latest CSO release in their Earnings and Labour Costs series, show unadjusted average earnings up 5.5 per cent on the previous year to €844.98 per week or €25.56 per hour. But these announcements are not cause for celebration, they provide further evidence that Covid-19 has disproportionately affected lower earners.

According to preliminary estimates of the Earnings and Labour Costs Quarterly release, average weekly earnings were €844.98 in Q4 2020, an increase of 7.5% from €786.33 one year earlier. This represents average earnings of those remaining in employment in the Irish economy in Q4 2020, including those supported by the Employment Wage Subsidy Scheme (EWSS).

Average unadjusted and seasonally adjusted hourly earnings are now 18.6 per cent and 19.4 per cent above the level of Q1 2008, the time of the last recession and have been rising since 2013 (Chart 1).  This indicates that the economic impact of the pandemic is less equitable than the previous crash as job losses have primarily been concentrated in certain sectors.

The CSO reports employment by NACE sectors (a classification system used across Europe that groups organisations according to their business activities). Chart 2 compares the number of employees in each sector for the quarters Q4 2019 and Q4 2020, and the change in each sector in the intervening 12 months.

Clearly the Accommodation and Food Service Activities sector has been worst affected, losing 51,500 employees, followed by administrative and support service activities (a loss of 29,700 employees), and Arts, Entertainment and Recreation (a loss of 10,700 employees).

Other sectors grew their staff compliment to meet the demands of the pandemic – the Wholesale and retail trade; repair of motor vehicles and motorcycles sector grew by 13,900 employees, while Manufacturing grew by 11,900 employees and Industry by 10,400. 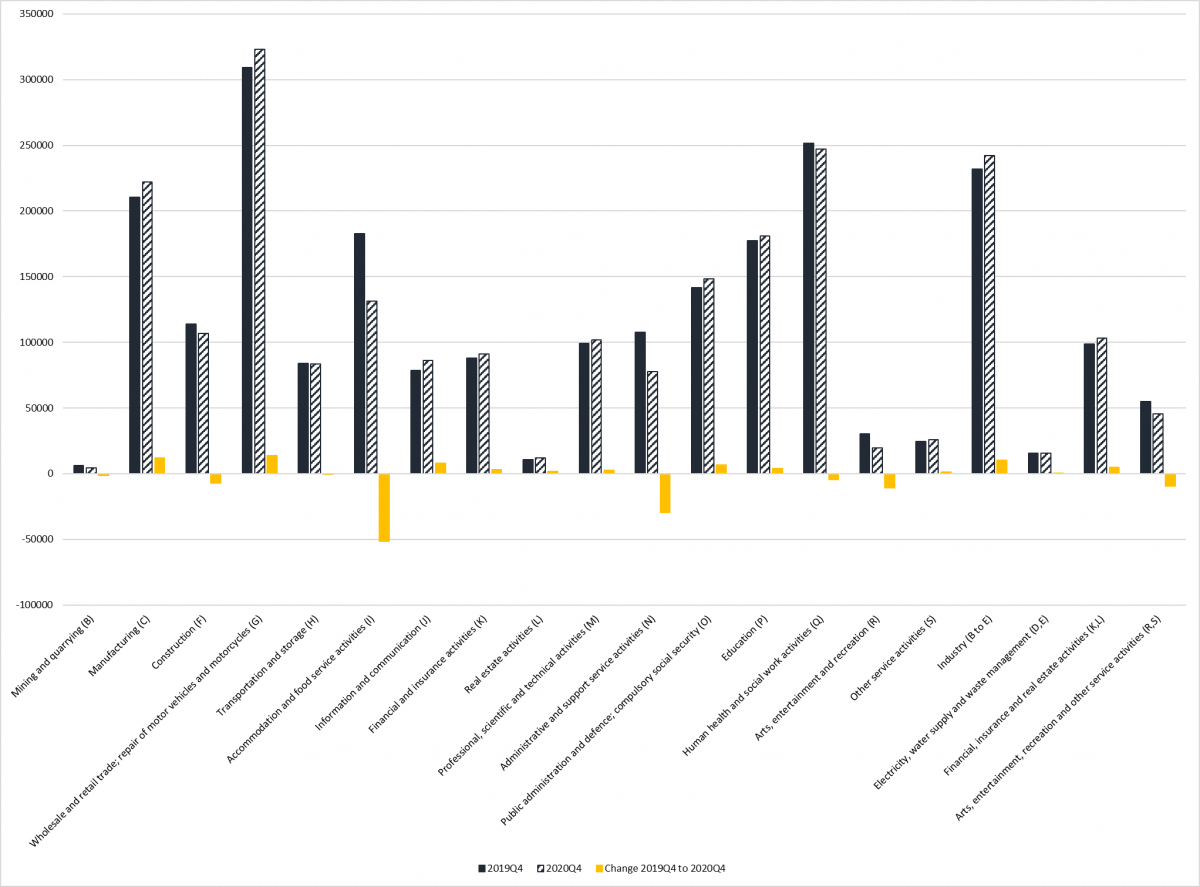 Notwithstanding Government measures put in place to support businesses and staff, low-paid sectors remained the most precarious throughout the pandemic. Many job losses in these sectors are likely to be long-term, if not permanent. Addressing this increase in unemployment will be one of the major challenges for Government as we emerge out of the pandemic. Social Justice Ireland urges Government to: