Experts point to Climate Action as the most urgent SDG - Globescan

In response to the question 'Which three Sustainable Development Goals (SDGs) do you think require the most urgent action?' over 500 experts representing business, government, NGOs and academia across 75 countries overwhelmingly chose Climate Action, according to the Globescan Sustainability Survey. The next most pressing were deemed to be Life on Land, Reduced Inequalities, and Responsible Consumption and Production. Reduced Inequalities, Quality Education, Zero Hunger, and Good Health have all increased in perceived urgency compared to 2019 (Figure 1). 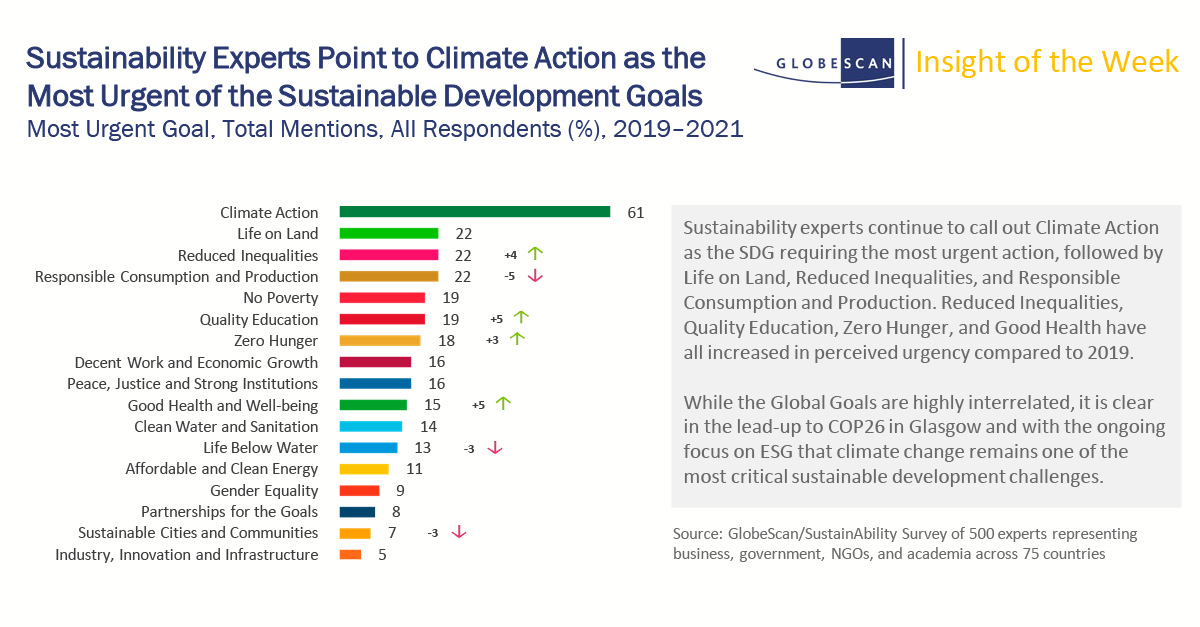 How does Ireland fare?

In February 2021, Social Justice Ireland launched 'Measuring Ireland's Progress: The Sustainable Progress Index 2021'. Here we look at the five most urgent SDGs, according to the experts, and how Ireland is doing compared to our EU 15 peers.

In the authors exploration of SDG 13, Climate Action, which seeks to implement the commitment to the United Nations Framework Convention on Climate Change and operationalize the Green Climate Fund, they noted that SDG 13 integrates climate change mitigation and measures into strategies and policies to reduce the severity from the effects of climate related hazards and natural disasters.

In the EU context, SDG13 focuses on three themes: climate mitigation, climate impacts, and climate initiatives that support climate action.  Eurostat’s most recent overall assessment of progress on this goal is neutral, meaning that “progress has been made in some areas, while negative developments occurred in others”.

International agencies still find measuring this goal problematic when attempting to determine important trends. This is due to data limitations (for example, reliable and comprehensive measures of mitigation, impacts and initiatives). Our SDG consists of 2 indicators. Eurostat utilize GHG emissions as a key indicator under this SDG and we use it here. There has been some progress on this indicator at the EU level, and GHG emissions have reduced by 20.6 % compared with 1990 levels. However, based on past trends, the EU is not on-track to meet its UN 2030 target (p.237). Ireland’s emissions have for the most part declined over the years, but they continue to be well above the EU average. Ireland is ranked second last on this indicator, based on most recent data, second only to Luxembourg.

Our second indicator is the effective carbon tax rate[1] and Ireland is ranked 8th on this measure. Overall however, the score for SDG13 is poor among the EU15 and Ireland is in 13th place.

In terms of SDG 15, Life on Land, Ireland compares relatively well. SDG15 is one of the key goals, along with SDG14 that incorporates environmental considerations for all UN member countries. It seeks to protect, restore and promote the conservation and sustainability of ecosystems. SDG 15 is concerned with the use of terrestrial, inland-water and mountain ecosystems, which are enhanced by halting deforestation, restoring degraded land and protecting species. This is especially important given global trends such as population growth, accelerating urbanisation and the increasing need for natural resources.

In the EU, policy focuses on attempting to ensure ecosystems are healthy and sustainably used and managed.  However, SDG15 shows a mixed picture in the EU. Some progress has been made on improving the status of ecosystems. However, “progress in halting and reversing land degradation and biodiversity loss has been mixed, and most indicators of biodiversity…including those beyond the ones featured in this report… show continued and strong declines in biodiversity and species abundance” (Eurostat, 2020, p.273).

The authors of our report settle on four indicators to reflect SDG15. Ireland scores in the top three for indicators of the share of protected terrestrial areas and freshwater areas. Less favourable is the score on the Red List index which estimates biodiversity loss. Ireland is ranked 8th on this indicator. Finally, at just under 11 per cent, the share of land dedicated for forestry use is well below the EU average. The overall rank on this SDG is 4.

SDG10 calls for reducing inequality relating to income, sex, ages, disability, race, class, ethnicity, and religion within and among countries. It also focuses on inequalities between countries, and migration and social inclusion. Increasing the income of the bottom 40 per cent of the population by adopting policies and legislation is another aim of SDG10.

Trends regarding inequalities in the EU show an overall stagnation in income inequalities between different groups of society over the past five years (Eurostat, 2020). However, the income gap between the rich and the poor remains large: “[i]n the EU, this ratio (the income quintile share) has increased slightly since 2010, reaching 5.1 in 2018. This means that the income of the richest 20% of households was about five times as much as that of the poorest 20%” (Eurostat, 2020, p. 185).

Our SDG10 is calculated using 4 indicators. Data for the Palma Index[2] shows Ireland is ranked 8th on this indicator. Using another measure, the Gini coefficient, results in the same ranking for Ireland among the EU15. We see a mixed performance with other indicators for SDG10. A measure of social justice places Ireland in 7th place, while a measure of household debt gives Ireland an indicator score putting it in 9th place. Overall, our selected indicators for this SDG give Ireland a ranking of 8.

Consumption and production – key driving forces in the global economy – are the focus of SDG12. The main aim of SDG12 is about doing more and better with less. It calls for adopting sustainable practices and procedures for business and an increase in environmentally friendly activity by consumers to enhance sustainable consumption and production. Activity would be supported through the development of new technologies, production and consumption methods.

In the EU, the focus is on developments in the area of decoupling environmental impacts from economic growth, energy consumption, and waste generation and management. However, at the EU level, progress has been mixed. Specifically, while there have been improvements in decoupling environmental impacts from economic growth, increasing the value added from green products and services, and managing waste, waste generation as well as the consumption of toxic chemicals have increased over the past few years. Further average CO2 emissions from new cars are not falling fast enough to meet the target (Eurostat, 2020, p.221).

5 indicators are used to generate our SDG12. Ireland ranks poorly overall on this SDG.  Production of municipal waste is one of the highest among the EU15 (ranked 12). The recycling rate of municipal waste is very low (ranked 12) and the indicator for circular material use (%) is the lowest among the countries. On the plus side, the scores for both resource productivity, and CO2 emissions from new passenger cars put Ireland in the middle ranking for both indicators. Nevertheless, the overall score and rank of 14 shows the extent of the challenge facing Ireland on this goal.

SDG 1 calls for an end to poverty in all its manifestations.  It aims to ensure peoples’ basic needs are met, by focusing on equal rights and access to economic and natural resources, including technology, property and basic and financial services.

According to Eurostat (2020, p.35), meeting its citizen’s basic needs and eradicating all forms of poverty has been an ongoing priority of the EU. However, despite favourable trends in the EU over the past few years, Eurostat believe that the improvement in poverty has been “too slow to put the EU on track towards meeting its target of lifting at least 20 million people out of this situation by 2020” (Eurostat, 2020, p.12).

Various indicators are used by Eurostat to reflect SDG1. However, the key focus is proportion of people living below the poverty line (however measured), and access to basic facilities and services. The UN official indicators include measures that capture extreme poverty (such as the poverty headcount ratio at $1.90/day, percentage of the population). Our focus here is the EU15 countries (with broadly similar levels of development), so we exclude some of the less relevant UN indicators.

Four indicators, based on data from Eurostat and the OECD are used to compute our SDG1. The indicators are chosen to give an overall picture of poverty in the EU15. The poverty rate (the share of the population whose incomes fall below half the median disposable income for the entire population after taxes and social transfers) is closely aligned with the official UN indicator. The Eurostat indicators: severely materially deprived people (percentage of the population); low-work intensity households, and people living in deprived conditions, (leaky roof, damp walls, floors, etc.) are meant to capture poverty among more developed countries. While Ireland does reasonably well on the poverty measure, less favourable scores on the other indicators puts it in 9th place overall. Finland, Sweden and Austria score highest on this SDG.

Of the five most pressing SDGs according to international experts, Ireland ranks in the bottom third on two, the middle third on two and the top third on one when compared to our EU 15 peers. We need to reprioritise our approach if we are to meet our Agenda 2030 targets.

[1] The effective carbon rate is the sum of taxes and tradeable permits that put a price on carbon emissions. The measure here comes from the OECD and excludes CO2 from biomass.

[2] The Palma Index is another measure that attempts to capture inequality. It is the the ratio of the richest 10 per cent of the population’s share of gross national income divided by the poorest 40 per cent’s share.