The gender employment gap is the difference in rates of employment for men and women.  New figures from Eurostat shows that education has a key role to play in closing this gap. For those with low educational attainment, the gap is wider than it was a decade ago.

In the third quarter of 2020, across the EU27, the employment rate for people aged between 15 and 64 was 62.4 per cent for women and 73.1 per cent for men – a gap of 10.7 percentage points and a decrease from 12.4 percentage points in 2010. While decreases in the gender gap are to be welcomed, there is still much to be done to close it. It is clear from the data that not only is education a key determinant of employment, it also affects the gender gap (Chart 1). 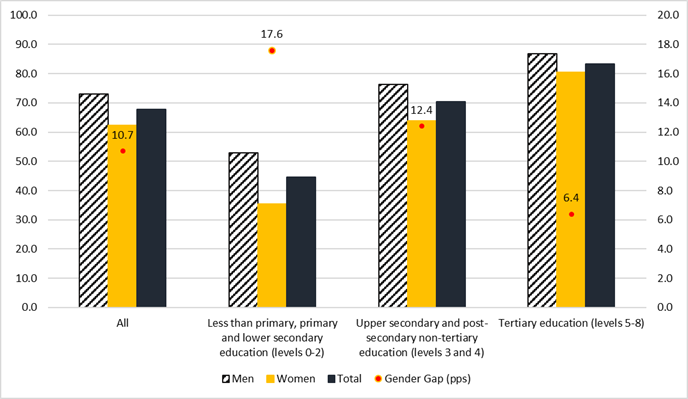 For those with medium levels of education, defined by Eurostat as ‘Upper secondary and post-secondary non-tertiary education (levels 3 and 4)’, the employment rates for men and women are 76.3 per cent and 63.9 per cent respectively, a gap of 12.4 percentage points and a slight decrease from 12.5 percentage points a decade earlier.

The Gender Gap in Ireland

As can be seen in Chart 2, the lower the rate of educational attainment, the higher the gender gap.

For those with the lowest educational attainment, the employment rates for men and women were 43.9 per cent and 24.8 per cent respectively, a gender gap of 19.1 percentage points and an increase from 16.4 percentage points in 2010.

And for those with tertiary education, the employment rates for men and women were 87.9 per cent and 78.7 per cent respectively, a gender gap of 9.2 percentage points and an increase from 6.1 per cent in 2010. 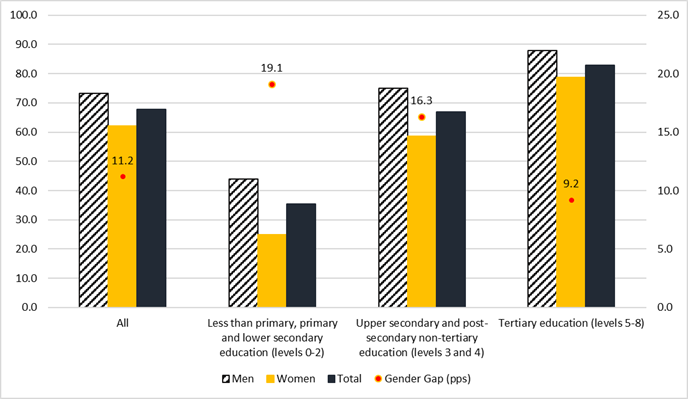 The above data clearly indicate a close correlation between educational attainment and the gender gap. Education is widely recognised as crucial to the achievement of our national objectives of economic competitiveness, social inclusion, and active citizenship.  It benefits not just the individual, but society as a whole and the returns to the economy and society are a multiple of the levels of investment. However, the levels of public funding for education in Ireland are out of step with these aspirations. The response to Covid-19 will exacerbate existing inequalities within our education system and Government must work to mitigate against this, and to ensure that those who are impacted the most will receive the necessary support. First and foremost this requires prioritising investment in areas where it is most needed.

There are also other barriers to employment for women outside of education, primarily due to their taking on additional caring responsibilities in the home[1]. This must be addressed if we are to have equality in the workplace.

Issues such as access to affordable childcare, suitable, relevant life-long learning opportunities and ancillary supports that allow women to fully participate in society must from part of the suite of basic services of a new Social Contract.