Brexit is the manifestation of a political and social discontentment that has sadly been directed to entirely the wrong place; the result of years of anti-EU rhetoric, and failed social and economic policies.

For many, the 2016 referendum was a case of being faced with a choice between “Leave” and “Remain”, and thinking “I don’t know if what’s being offered to me here is right, but I do know the status quo isn’t working for me, nor is it working for my children”. There is an element of desperation to it all. More and more people have lost faith in politicians and institutions, and part of that desperation can be blamed on a failure of more progressive-minded politicians and parties to present a coherent vision of a viable alternative. The fact that post-Brexit Britain will now probably look like something which few would have voted for in the first place is no longer the issue.

It is well-known at this point that much of the “Leave” campaign was fuelled by fear-mongering and untruths about immigration and the financial cost of the EU membership. We now have a better idea of the real financial cost to the UK of leaving the European Union: According to the Bank of England, the cost of the a no-deal exit to the British economy could be as much as £40 billion per year, more than double the £350 million per week promised on the side of a now famous bus. 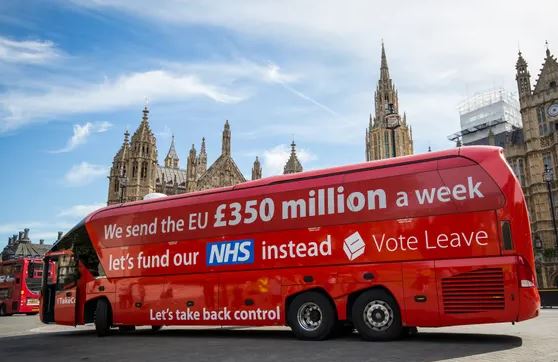 “But don’t worry”, the Leavers told everyone. “Brexit will give the UK the opportunity to negotiate its own trade deals; better than the ones we already have”. But the idea that the UK can now embark upon a brave new world of trade agreements that will more than make up for what they lose in trade with the EU has always been so ridiculous it’s a wonder this lie wasn't called out long ago. Here's why:

To state the obvious, the UK's trade with other EU countries is going to take a big hit; that much is inevitable and self-explanatory.

To make up for that loss, the UK will have to:

Similar movements in other countries should be careful what they wish/vote for as regards so-called "economic independence".

The European Pillar of Social Rights

It is easy now to call out the lies of the pro-Brexit campaigners, but their strategies are clearly convincing and effective. Ireland has been largely immune from the populism, nationalism, and political upheaval affecting much of Europe - and indeed the rest of the world - and has led indirectly to Brexit. But that does not mean it will remain so indefinitely. It is important that lessons are learned from Brexit, and that policymakers take note. The social and economic disillusionment that has led millions of British people to vote against their own interests will not necessarily remain confined to that country.

What can we do about it?

The European Pillar of Social Rights sets out 20 key principles to support fair and well-functioning labour markets and welfare systems. It was conceived as a reference framework to screen the employment and social performance of participating Member States, to drive reforms at national level and, more specifically, to serve as a compass for the renewed process of convergence towards better working and living conditions in Europe.

The 20 principles and rights enshrined in the Pillar are structured around three categories:

They place the focus on how to deliver on the promise of the Treaties of a highly competitive social market economy, aiming at full employment and social progress.

However, despite having been proclaimed almost two years ago, it is difficult to find much hint of progress on these issues. In advance of the May 2019 European elections, Social Justice Ireland - on a joint platform with Trócaire - called on all elected MEPs to act to ensure the delivery of the European Pillar of Social Rights. We will be following closely the progress of Irish representatives in Brussels in this regard. Such policies would help to renew faith in the European project for millions of European citizens and go a long way to preventing the kind of anti-European sentiment that led to Brexit being fomented in other European countries, including Ireland.

So much of the mess that is Brexit has come about as a result of misconceptions of what constitutes sovereignty; people voting for Brexit in order to regain national independence have missed a trick. Sovereignty nowadays is relative, and is less about national self-determination and more about who your sovereignty is pooled with in order to face the challenges presented by an increasingly globalised world. Those in the UK who think they are leaving the EU in order to get their sovereignty back are not considering the full context. Britain is a former global power on the wane in terms of international prestige and importance, as well as economic clout, and has decided that while it may not face the world alone, it would rather not do so alongside some of its most obvious geopolitical allies.

None of this was discussed during the referendum campaign, which focused instead on issues like immigration and lies about the cost of membership. How unfortunate that membership of such an organisation as the EU should boil down mainly to people’s feelings to immigration. One suspects that while a good many people had more sound reasons for voting ‘Leave’, far too many English people voted out of a wistful nostalgia for a foregone time; one through which they may not even have lived themselves, when Britain was a genuine world power and didn’t have to bare the ignominy of influence in its affairs from Brussels and Frankfurt.

However, the globalisation of so many aspects of modern society means that Britain will continue to be affected by outside influences whether it likes it or not, and it will soon leave the world’s second largest economy, thus reducing even further the power it wields internationally and the influence it has over things that will continue to affect it, regardless of whether it is a member of the EU or not.

Though the most likely outcome at the end of October currently seems like the UK "crashing" out of the EU without a trade deal, a trade-deal (at some point) is still inevitable. The UK, which in theory has voted to no longer be bound by the influence of the EU, will continue to be bound to some extent by EU legislation regarding safety standards, codes of business conduct and financial regulation, and other regulations, for without being so bound they will not be able to trade and do other business with the bloc in certain areas. The main difference is that now they will no longer have any power over setting said regulations.

Without input at a supra-national level, the UK also has less control over regulation of the environment that affects every country; air and sea pollution doesn’t respect borders. It will also have less input into the financial regulation of the wider economic environment affecting its own economy.

The EU is the most successful regional grouping in modern history. It will likely continue to be so, even without the UK. While most of the EU would no doubt prefer to conclude a deal with Britiain in advance of October 31st, the repercussions of re-opening negotiations and giving concessions to Prime Minister Boris Johnson are probably not worth it. There needs to be a value in remaining a member of the club, so to speak, or any of the remaining 27 countries might decide that they'd like a similar status: outside the Union with few responsibilities, but retaining the majority of the benefits. Many European leaders already feel that too much has already been conceded in the deal that former Prime Minister Theresa May failed on three occasions to get through Parliament. For the sake of the future of the European project, no further concessions can be given.

After all, it should be remembered: Yes, the EU needs Britain. But Britiain needs to realise it needs the EU too.