Low Pay in Ireland is still a huge issue

The most recent available data from the OCED confirms what has long been understood to be the case: the levels of low pay in the Irish economy at at a far higher level that among our peer countries.

Low pay is defined by the OECD as for which earnings are below two-thirds of a country's median income. The chart below (courtesy of the OECD) dispalys the proportion of the work force in each country that is working for low pay. 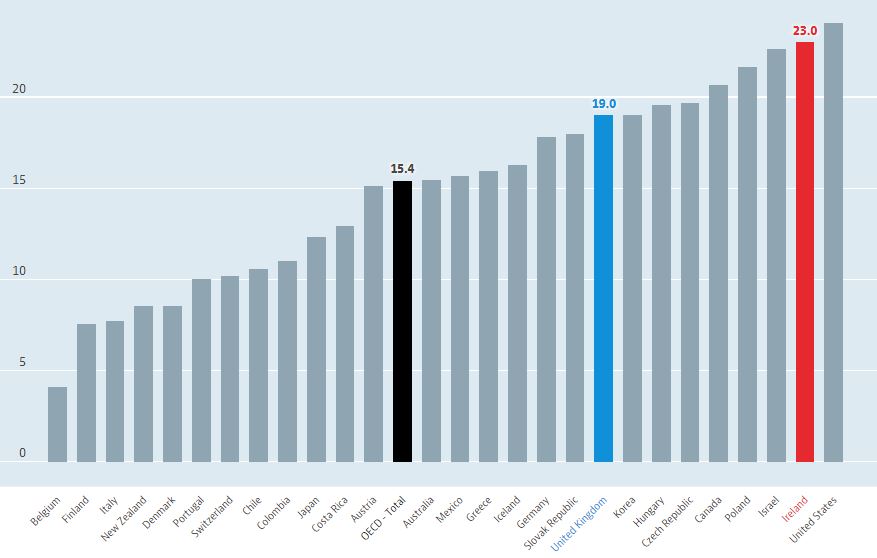 Social Justice Ireland has long been pointing out this situation, and arguing that the National Minimum Wage (NMW) should, over the next few years, be moved closer to the level of the Living Wage. The NMW is now €10.10 per hour. However, the Living Wage is now €12.30 per hour.

Addressing low pay remains a key challenge for Irish society. As we have continually highlighted, annual poverty figures show that more than 100,000 people in employment are living in poverty (the working poor).

What is a Living Wage?

In principle, a Living Wage is intended to establish an hourly wage rate that should provide employees with sufficient income to achieve an agreed acceptable minimum standard of living. In that sense it is an income floor, representing a figure which allows employees to afford the essentials of life.

Paying low-paid employees a Living Wage offers the prospect of significantly improving the living standards of these employees. Social Justice Ireland has supported the emergence of this concept over the past few years and we hope to see this new benchmark adopted across many sectors of society in the years to come.

The call for the introduction of a Living Wage for Ireland reflects a belief that individuals working full-time should be able to earn enough income to enjoy a decent standard of living. The Living Wage is a wage which makes possible a minimum acceptable standard of living. Its calculation is evidence-based and built on budget standards research which is grounded in social consensus. As noted above, the current Living Wage is €12.30 per hour and is:

In principle, the Living Wage is intended to establish an hourly wage rate that should provide employees with sufficient income to achieve an agreed acceptable minimum standard of living. Earnings below the Living Wage suggest employees are forced to do without certain essentials so they can make ends meet.

The Merits of a Living Wage

Social Justice Ireland believes that concepts such as the Living Wage have an important role to play in addressing the persistent income inequality and poverty levels outlined earlier in this submission. There are many adults living in poverty despite having a job – the working poor. Improvements in the low pay rates received by many employees offers an important method by which levels of poverty and exclusion can be reduced. Paying low paid employees a Living Wage offers the prospect of significantly improving the living standards of these employees and we hope to see this new benchmark adopted across many sectors of society in the years to come.

Social Justice Ireland would like to see government commit to a timeframe over which the National Minimum Wage would move towards the rate of the Living Wage.