Ireland’s housing crisis is showing no sign of abating.  Double digit rent inflation sees national average rents jump to almost €1,300 per month, in Dublin the average is closer to €2,000, outside the reach of most people on low or even average incomes.  Government’s reliance on the private rented sector, subsidised through the Housing Assistance Payment (HAP) is not working.  Increasing rents not only puts the sustainability of HAP as a policy response into question, but risks the long-term security of those 36,000 households currently in receipt of HAP, particularly in areas where private rent is outstripping the HAP limits.  The scarcity of properties, particularly with the increased use of short-term letting facilities, further adds to the difficulties of those households, many of which are families, struggling to find a long-term place to call home.

Ireland is by no means a poor country.  There is enough money available for Government to make a real impact on our infrastructural and societal deficits in Budget 2019 if it chooses to do so.  There is no ‘one size fits all’ solution to the housing crisis, and exploration of both on- and off-balance sheet development is required.  In early June 2018, Social Justice Ireland made a submission to the Department of Housing, Planning and Local Government for a new cost rental model, a new rent system based on the cost of providing homes, and suggests how this might be financed outside of the general government sector (off balance sheet) (see Figure 1). 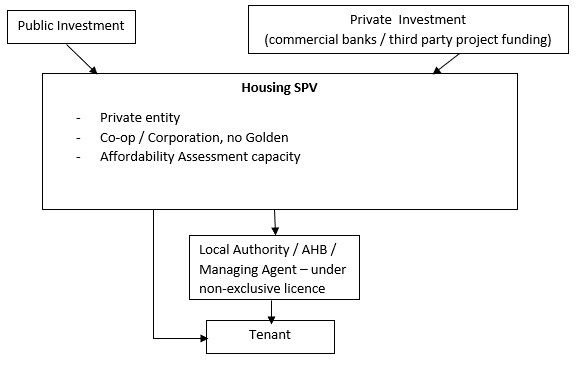 In December 2017, the CSO reclassified Approved Housing Bodies (AHBs), formerly outside of the general government sector, as being, in whole or in part, part of general government.  This decision, affirmed by Eurostat in early 2018, was based on the legislation establishing AHBs; the funding mechanisms used by AHBs and conditions attached; the level of Government control and oversight; the market/non-market nature of AHB rented housing; and the overall policy context.  In developing our proposal we reviewed this decision; the provisions of the European System of Accounts and the Manual of Government Deficit and Debt 2016 to formulate a structure capable of attracting long-term, sustainable investment to this area without adding significantly to the Government’s balance sheet.

In our Budget Choices document, Social Justice Ireland proposed a €1.25 billion package for housing – including the development of cost rental; supporting increased social housing construction by local authorities and AHBs; expanding a loan scheme to allow owners of untenantable properties back into use; and improving supports for homeless services to tackle both the causes and consequences of homelessness.  Cost rental is not a new concept, there have been some small pilots recently, however given the scale of the problem, we need to scale up if we are to reverse the current trend of rent inflation.

The time has come to address this problem head on.  With greater flexibility available in Budget 2019, the time is now.