An open and transparent policy evaluation process, with meaningful engagement from all stakeholders, would ensure that we learn from our successes and from our mistakes. Such a process would ensure that we evaluate both and offer a framework to take our policy successes and replicate them across Government.  Social Justice Ireland believes strongly in the importance of developing a rights-based approach to social, economic, and cultural policy. A key policy measure to deliver an open and transparent policy evaluation process is to measure the socio-economic impact of each budget.  This should be a statutory responsibility for Government.

Budget 2020, delivered in October 2019, marked the final Budget of the last Government. It was a Budget that Social Justice Ireland described as failing ‘in its basic task to protect the vulnerable’. In this subsection, we first review the distributive impact of Budget 2020 before presenting the results of our analysis of the cumulative impact changes to income taxation and welfare since 2017.

When assessing the change in people’s incomes following any Budget, it is important that tax changes be included as well as changes to basic social welfare payments. In our calculations, we have not included any changes to other welfare allowances and secondary benefits as these payments do not flow to all households. Similarly, we have not included changes to other taxes (including indirect taxes and property taxes) as these are also experienced differently by different household types. Wage increases, including those for the statutory minimum wage, are also excluded as the nature and value of these changes will differ across earners.

Chart 1 demonstrates that there is little change arising from Budget 2020 for the various household groupings we track annually. The Budget did not deliver any welfare or income taxation measures of significance, meaning that almost all household did not benefit from any additional resources as a result of its actions. This includes no increase in the weekly rate of jobseekers benefit although, as the chart shows, compared to 2019 the unemployed did gain a small amount of additional income. This is related to the full-year effect of welfare increases in Budget 2019 (whose changes were implemented in March 2019) together with the increased value of the Christmas Bonus. Total increase year-on-year was €65 for a single person and €108 for a couple.

The lack of any welfare increases in Budget 2020 was regrettable. Over 2020, as wages rise, those dependent on welfare will slip further behind. Inevitably, the recent progress on poverty and inequality will be somewhat reversed. 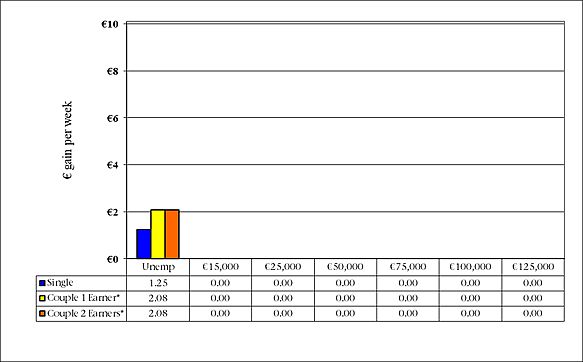 Notes: * Except in case of the unemployed where there is no earner. Unemployed aged 26 years and over. All other earners have PAYE income. Increase is annual average increase. Couple with 2 earners are assumed to have a 65%/35% income division.

Over the past few years Social Justice Ireland has developed its ability to track the distributive impact of annual Budgets on households across Irish society. Our analysis tracks changes from year to year (pre and post each Budget) and across a number of recent years (the lifetime of a Government etc)[1].

Following Budget 2020, we assessed the cumulative impact of changes to taxation and welfare over the four Budgets delivered by the last Government (Budgets 2017, 2018, 2019 and 2020). As different policy priorities can be articulated for each Budget, it is useful to bring together the cumulative effect of policy changes on various household types.

The households we examine are spread across all areas of society and capture those with a job, families with children, those unemployed and pensioner households. Within those households that have income from a job, we include workers on the minimum wage, on the living wage, workers on average earnings and multiples of this benchmark, and families with incomes ranging from €25,000 to €200,000.

In the case of working households, the analysis is focused on PAYE earners only and therefore does not capture the changes in recent Budgets that were targeted at the self-employed.

At the outset it is important to stress that our analysis does not take account of other budgetary changes, most particularly to indirect taxes (VAT and excises), other charges (such as prescription charges) and property taxes. Similarly, it does not capture the impact of changes to the provision of public services. As the impact of these measures differs between households it is impossible to quantify precise household impacts and include them here. However, as we have demonstrated in previous publications, these changes impact greatest upon those living on the lowest incomes in Irish society. 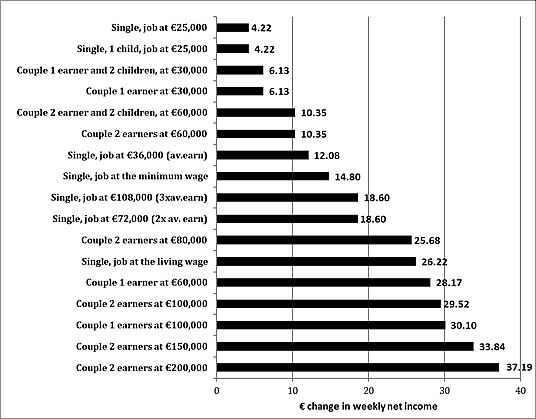 Over the years examined (2017-2020) all household types record an increase in disposable income. Among households with jobs (see Chart 2), the gains experienced range from €4.22 per week (for single workers on €25,000) to almost nine times as much, €37.19 per week, for a couple with 2 earners on €200,000. Overall, across these households the main gains have flowed to those on the highest incomes.

Among households dependent on welfare, the gains have ranged from €16.19 per week (for single unemployed individuals) to €38.58 per week (for unemployed couples with two children) - see Chart 3.

Our analysis points towards the choices and priorities the Government has made. Overall these choices have given least to single welfare-dependent households and those on the lowest earnings. These outcomes that will be reflected in future income distribution data and are likely to lead to further increases in Ireland’s recorded levels of income inequality.

Measure the socio-economic impact of each Budget

There is a need to measure the socio-economic impact of each budget.  This should be a statutory responsibility for Government. Previously, the Government published Poverty Impact Assessment Guidelines provided by the Office of Social Inclusion (2008) in the budgetary documentation using the ESRI’s SWITCH tax-benefit model which captured the distributional impact of changes in most taxes and benefits, but this practice was discontinued from Budget 2010. Government should reintroduce this practice and also adopt gender equality and regional analyses and apply these to each budgetary measure. The Revised Estimates for 2019 contain initial steps towards addressing the nine equality grounds. But much remains to be done.

Social Justice Ireland believes seven basic rights should be acknowledged and recognised (this does not mean we exclude other rights, just that we prioritise these seven). These are the rights to:

For these seven rights to be vindicated, greater public expenditure to fund a broader provision of services is required.

[1] A document on our website entitled ‘Tracking the Distributive Effects of Budget 2020’ provides a more detailed overview of the approach taken by Social Justice Ireland to generate these results.