There is no official definition of over-indebtedness in Ireland.  In his 2009 study, Stamp provided an expansive definition with reference to a 2008 study undertaken by a consortium of European organisations in the personal finance area, namely[1]:

People are over-indebted if their net resources (income and realisable assets) render them persistently unable to meet essential living expenses and debt repayments as they fall due.

The study then outlines five key measurements of over-indebtedness contained in the 2008 study, as:

The expansion of available credit with lax regulation was a key driver in the financial crisis of 2008.  When that crisis hit, and with it a sharp rise in unemployment, thousands of households experienced difficulties paying bills and everyday expenses.  Lessons were learnt that resulted in the constriction of mainstream credit, however half a million people were living in households in arrears on at least one bill in 2018 as we face another wave of job losses due to the COVID-19 outbreak.

At the time of the 2008 crash, Central Bank-regulated lending to private households exceeded €147 billion, the majority of this being mortgage finance (€123 billion) and the remainder for “other personal” finance (€24 billion).  In the years since, the constriction of mainstream personal credit resulted in the paying down of outstanding balances, rather than further borrowing, and a levelling-off of the total outstanding to the region of €90-100 billion.  As of September 2019, the total amount of Central Bank-regulated credit to Irish private households was €90.4 billion (Chart 1). 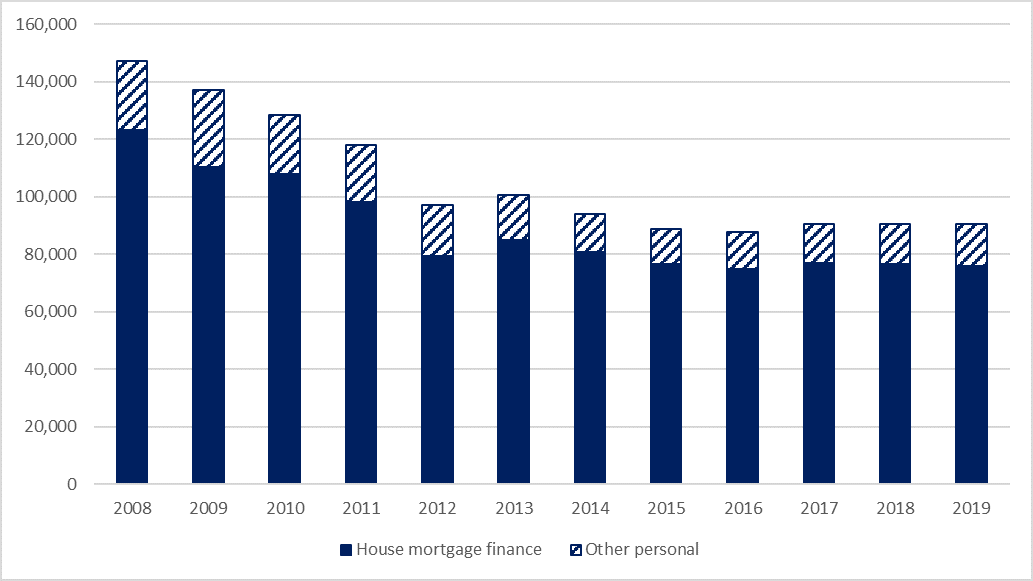 Notes:  Data for September each year.

While this would appear to show that the Irish population is in a better position now to deal with financial shocks than it was just over a decade ago, with less credit with which to get into difficulty, the reality is that almost the same number of people were living in households which reported being unable to face an unexpected financial expense in 2018 (at a time of almost full employment) as in 2008 (1.83 million in 2018 compared to 1.85 million in 2008). 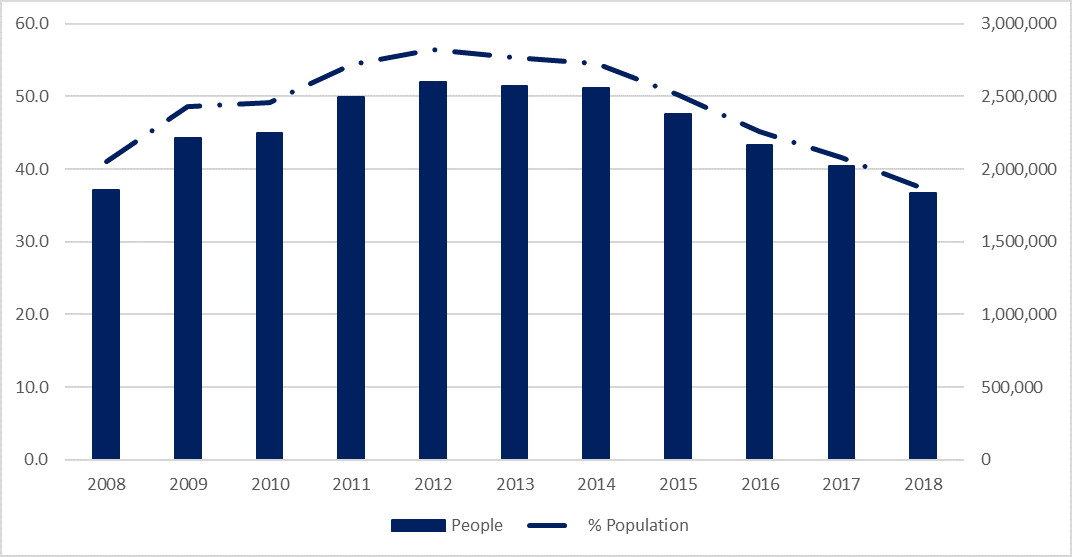 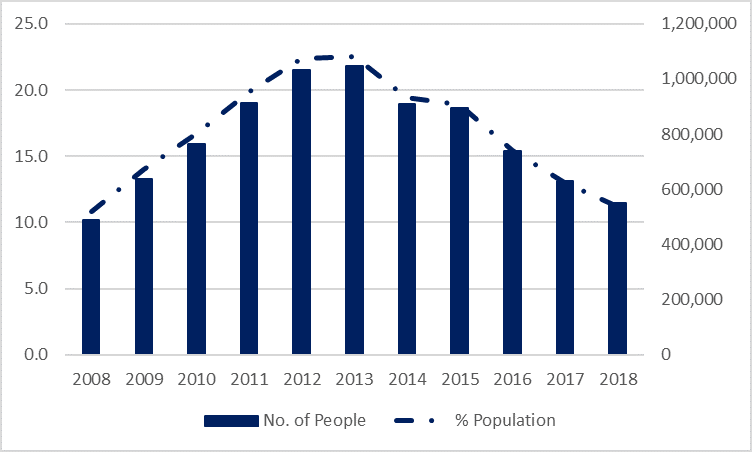 A breakdown by type of debt shows that, despite a return to full employment and a constriction of mainstream credit, the personal debt situation of Ireland’s households is very similar to what it was in 2008 (Table 1).

The data available from the Central Bank and the EU-SILC survey relates to “formal” sources of credit.  For many low-income households, restrictions on borrowing from mainstream lenders and an inability to provide for contingency savings means finding alternative sources of credit. A report from the Social Finance Foundation found that in 2018 there were 330,000 people accessing credit from moneylending firms[2].  The majority were female, aged between 35 and 54 and drawn from lower socio-economic backgrounds. A large proportion have loans from ‘home credit companies’ which charge APRs of up to 287%.  These alternative sources of credit are often prioritised, irrespective of interest rate or associated risks, as providing easier access to emergency funds and a personal connection with the creditor[3].

Policy responses to problem personal debt have been patchy at best.  A review of MABS Clients in Mortgage Arrears published in 2013[4] highlighted the difficulties experienced by MABS clients in mortgage arrears in coming to a new payment arrangement with their lender.  These difficulties were caused from a range of issues, indicating a lack of training on the part of front-line bank staff, a lack of understanding of financial terms among borrowers, and delays by lenders in processing requests for support.  A lack of understanding of financial terms was also raised in a report into non-mortgage debt published by TASC earlier this year[5], with the need to support greater financial capability among consumers were themes explored in both a report published by the Competition and Consumer Protection Commission[6] and the recent Civil Society Roundtable hosted by the Central Bank[7].

In the wake of the coronavirus, the Central Bank of Ireland urged banks to give payment breaks to borrowers whose jobs may have been affected.  Ensuring that these breaks are processed quickly and that the terms and conditions attached are easily understood must be a priority.

In addition, the MABS report highlighted other issues experienced by households in debt, including relationship breakdown, mental and physical health issues and addictions.  It is therefore concerning that the recommendations of the 2011 Mental Health Commission report on the mental health impacts of problem debt[8] are yet to be fully implemented.

Supporting over-indebted households requires a holistic, whole-person approach.  A National Taskforce on Over-indebtedness is required, focusing on prevention of chronic over-indebtedness to the extent that it impacts the health and well-being of individuals and the potential re-growth of the economy after the crisis has passed.  This will involve participation from all stakeholders to deal not only with the gaps identified in existing policies, but to develop policies for areas that have not yet been addressed (for example, illegal moneylending).

This Taskforce could have dedicated workstreams such as:

The work of the Taskforce would be overseen by a Steering Group, consisting of participants from all sectors, who would work to defined Key Performance Indicators to ensure that robust policies and procedures were implemented within specified timeframes.

Addressing the area of over-indebtedness should be a Government priority, effecting as it does not only the health and wellbeing of the individual, but the efficacy of economic recovery.

[6] Competition and Consumer Protection Commission (2018): Financial Capability and Well-being in Ireland in 2018