Social Justice Ireland welcomed the introduction of the COVID-19 unemployment and illness payment of €350 per week.   The increase in the emergency social welfare payment is an acceptance that the rate of €203 per week is simply not enough for people to survive on. The COVID-19 illness payment was introduced as part of the Health (Preservation and Protection and other Emergency Measures in the Public Interest) Act 2020 (the 2020 Health Act), while the unemployment payment is governed by pre-existing emergency social welfare legislation.  The section of the 2020 Health Act which introduced the illness payment was due to expire on 9th May 2020 and was extended until 19th June by cabinet on Friday 1st May 2020.  The recent discourse regarding the COVID-19 unemployment and illness payment, and the ‘need’ for it to be reduced was no doubt influenced by the fact that the legislation allowing amendments in respect of the illness payment was due to run out in less than a fortnight.  The seven week extension announced by An Taoiseach is welcome, but it still does not resolve the problem of the two tier social welfare system that has been created.

Much of this recent discourse is misguided.  Rather than focusing on reducing the COVID-19 unemployment and illness payment to the basic Jobseekers Benefit/Allowance which is €81 below the poverty line, we should take this opportunity to reform the social welfare system and begin the process of indexing social welfare rates to the minimum essential budget standard, something that Social Justice Ireland has long been calling for.

In Ireland 689,000 people are living in poverty.  This means that they are surviving on incomes below the poverty line.  The Central Statistics Office calculates the poverty line which is 60% of median income, adjusted to take account of family size and composition annually. 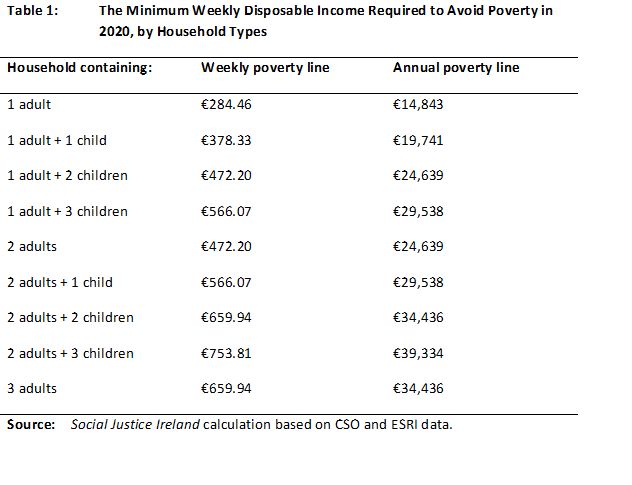 One immediate implication of this analysis is that most weekly social assistance rates paid to single people are €81 below the poverty line.

Budget 2020 failed to deliver an increase to the minimum social welfare payment. Social Justice Ireland regrets this decision. A lesson from past experiences of economic recovery and growth is that the weakest in our society get left behind unless welfare increases keep track with increases elsewhere in the economy. Benchmarking minimum rates of social welfare payments to movements in average earnings is therefore an important policy priority.

Just over a decade ago Budget 2007 benchmarked the minimum social welfare rate at 30 per cent of Gross Average Industrial Earnings (GAIE). This was a key achievement and one that we correctly predicted would lead to reductions in poverty rates, complementing those already achieved and detailed earlier. Since then the CSO discontinued its Industrial Earnings and Hours Worked dataset and replaced it with a more comprehensive set of income statistics for a broader set of Irish employment sectors. A subsequent report for Social Justice Ireland found that 30 per cent of GAIE is equivalent to 27.5 per cent of the new average earnings data being collected by the CSO. A figure of 27.5 per cent of average earnings is therefore the appropriate benchmark for minimum social welfare payments and reflects a continuation of the previous benchmark using the current CSO earnings dataset.

Given the importance of this benchmark to the living standards of many in Irish society, and its relevance to anti-poverty commitments, the current deficit highlights a need for the new Government, and Budget 2021, to further increase minimum social welfare rates and commit to converging on a benchmark equivalent to 27.5 per cent of average weekly earnings.

Social Justice Ireland supports the indexation of minimum social welfare payments to ensure recipients do not fall behind the rest of society.  We propose the benchmark should start at 27.5 per cent of average earnings as a minimum, with a set pathway to rise over time until it reaches the Minimum Essential Budget Standard as produced by the Vincentian Partnership for Social Justice[2].

In general, fluctuations in the poverty rates of those largely dependent on the welfare system has correlated in the past with policy moves that allowed the value of welfare payments to fall behind wage growth before eventually increasing these payments to catch up. If those dependent on social welfare are not to fall behind the rest of society at times of economic growth, the benchmarking of welfare rates to wage rates is essential.

To unravel the two-tier welfare system that has been temporarily created as a result of the COVID-19 crisis, and to truly deliver a fair and sustainable economy the new Government should develop a programme to index social welfare rates to the Minimum Essential Standard of Living over a five-year term.  To start with social welfare rates should be benchmarked to 27.5 per cent of Average Weekly Earnings as the first step in a five year process to index them to the Minimum Essential Budget Standard.

Full details of our proposals and background paper are available here[3].

Now is not the time to repeat past mistakes, nor is it the time to engage in divisive discourse on social welfare.  It is a time for leadership.  The new Government must show leadership and take this opportunity to reform of our social welfare system, give certainty to people on fixed incomes and ensure that the weakest in our society are not left behind again.