This post originally appeared as an article in the Irish Daily Star on Thursday, August 22nd

The Living Wage in Ireland is now €12.30 per hour, up 40 cents in the last 12 months, and just like in previous years the increase is being driven by the rising cost of housing and accommodation.

The current Minimum Wage is €9.80 per hour. This is €2.50 per hour less than the Living Wage of €12.30. Straight away it is obvious that the Minimum Wage does not offer anything close to the level of payment needed to afford all the essentials in life, and it means that hundreds of thousands of employees in Ireland are earning a wage that doesn’t allow them a decent standard of living.

The Living Wage is different from the Minimum Wage because it is calculated based on evidence. It is calculated by looking at the costs of a decent standard of living, and what someone needs to earn to afford this.  It covers a range of everyday essentials such as housing, transport, health, food, energy bills, car insurance and health insurance.  The Living Wage looks at only needs, not wants.  People earning below the current Living Wage rate of €12.30 per hour are probably having to go without some essentials to make ends meet. The Minimum Wage, on the other hand, is not (and never has been) based on the cost of living, nor has it ever been linked to changes in prices over time.

Worryingly, the Living Wage has increased in each of the last few years, even though the costs of many basics like food, household goods and communications (phones, internet etc.) are falling. Rents are the driving force in pushing up the Living Wage.  Aside from housing, there has been very little change in the overall cost of the minimum needs of a full-time single worker in the last year

In fact, if accommodation costs had not risen over the last five years the level of the Living Wage would actually have fallen.  Current Government housing policy has failed to tackle the housing crisis, and the ever increasing cost of rent continues to drive up the cost of living.

Low pay is a big problem for Irish society.  Social Justice Ireland continuously points out that more than 100,000 people in Ireland who have a paid job are living in poverty.  These are the “working poor”.  The best way to ensure that people working full-time can earn enough to afford a decent standard of living is to move the Minimum Wage closer to the Living Wage.  This could be done over a three to five year period and would play an important role in addressing low pay. 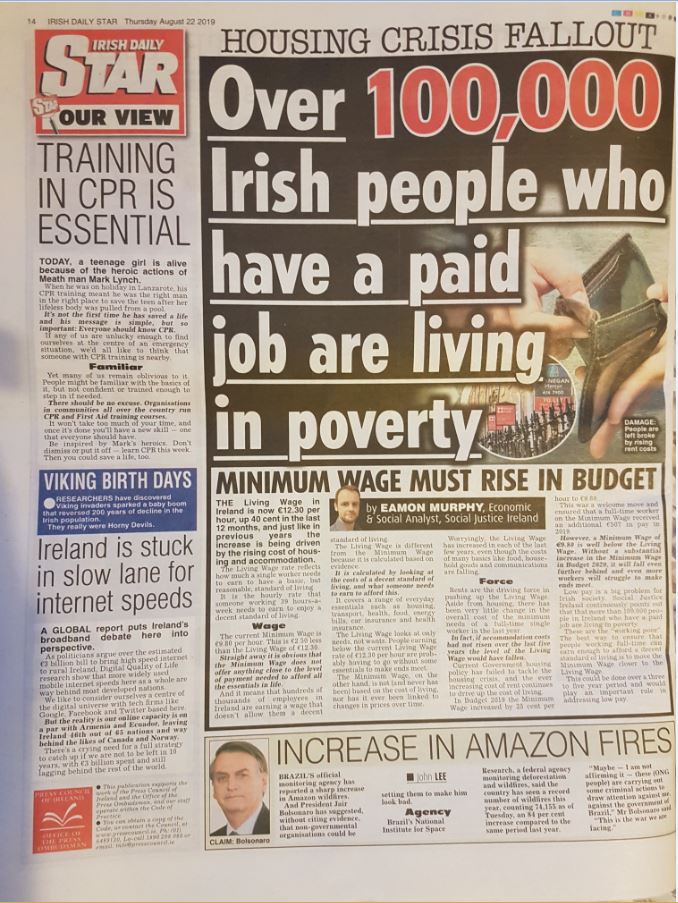