Last month the Central Statistics Office published the 2017 Survey on Income and Living Conditions (SILC) results. The results do not make for uplifting reading.

One of the most disappointing aspects of the numbers released is that despite record levels of employment and Ireland having one of the fastest growing economies in Europe, there is little relief for the working poor. There has been little change in the number of people in employment who are at risk of poverty - approximately 109,000 people with jobs are living in poverty. Many people assume that a job is an automatic poverty reliever but this is clearly not the case. The job must also be a well-paid job, and emerging trends of precarious working practices must surely contribute to a situation where more than 5 per cent of those in employment are still experiencing poverty.

Specific interventions are required to tackle the problem of the ‘working-poor’. Until Government makes tax credits refundable, it will not have an efficient mechanism by which it can address the issue of the working poor.

Making tax credits refundable would make Ireland’s tax system fairer, address part of the working poor problem, and improve the living standards of a substantial number of people in Ireland.

Whether you are working a few part-time hours each week or you are Leo Varadkar, everyone who is in employment in Ireland has tax credits. Once an individual's tax liability has been calculated, these credits are applied in order to bring down their tax bill. However, if a low income worker does not earn enough to use up their full allocation of tax credits then they will not benefit from any income tax reductions introduced by government in the annual budget via increases to the PAYE or Personal tax credits.

Making tax credits refundable would be a simple solution to this problem. It would mean that the part of the tax credit that an employee did not benefit from would be “refunded” (essentially paid, at the end of the tax year) to him/her by the Revenue Commissioners. The major advantage of making tax credits refundable lies in addressing the disincentives currently associated with low-paid employment and the main beneficiaries of refundable tax credits would be low-paid employees (both full-time and part-time). The chart below displays the impacts of the introduction of this policy across various gross income levels. It clearly shows that all of the benefits from introducing this policy would go directly to those on the lowest incomes. 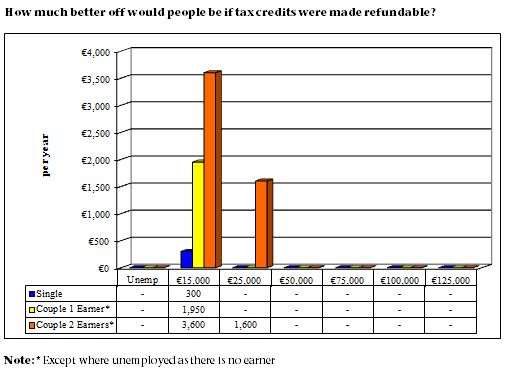 Most people with regular incomes and jobs would not receive any cash refund because their incomes are too high. They would simply benefit from any increase to tax credits via a reduction in their tax bill. Therefore, as the above chart shows, no change is proposed for these people. For other people on low or irregular incomes, the refundable tax credit could be paid via a refund by the Revenue Commissioners at the end of the tax year. Following the introduction of refundable tax credits, all subsequent increases in the level of the tax credit would be of equal value to all employees.

To illustrate the benefits of this approach, the charts below compare the effects of a €100 increase in the personal tax credit before and after the introduction of refundable tax credits. The first shows the effect as the system is currently structured – an increase of €100 in credits, but these are not refundable. It shows that the gains are allocated equally to all categories of earners above €50,000. However, there is no benefit for those workers whose earnings are not in the tax net.

The second chart shows how the benefits of a €100 a year increase in personal tax credits would be distributed under a system of refundable tax credits. This simulation demonstrates the equity attached to using the tax-credit instrument to distribute budgetary taxation changes. The benefit to all categories of income earners (single/couple, one-earner/couple, dual-earners) is the same. Consequently, in relative terms, those earners at the bottom of the distribution do best. 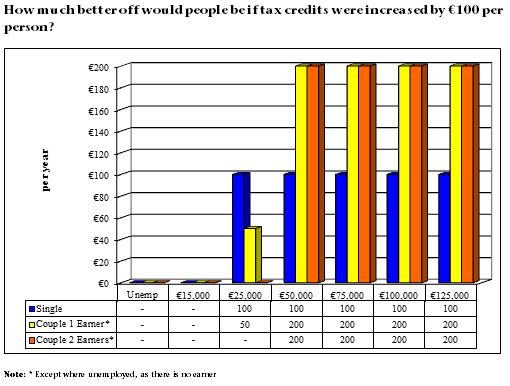 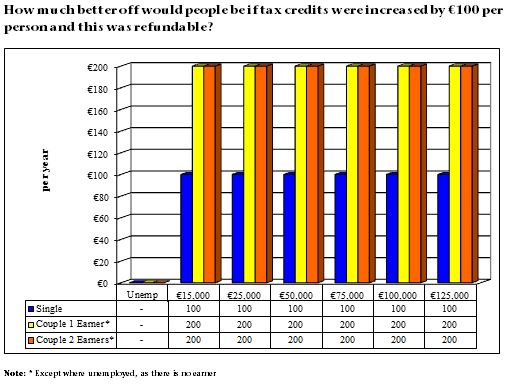 Among the merits of adopting this approach are:

In 2010 Social Justice Ireland published a detailed study on the subject of refundable tax credits. Entitled Building a Fairer Tax System: The Working Poor and the Cost of Refundable Tax Credits, the study identified that the proposed system would at that time benefit 113,000 low-income individuals in an efficient and cost-effective manner. When children and other adults in the household are taken into account the total number of beneficiaries would be 240,000. The cost of making this change would be €140m. The Social Justice Ireland proposal to make tax credits refundable would make Ireland’s tax system fairer, address part of the working poor problem, and improve the living standards of a substantial number of people in Ireland. The following is a summary of that proposal:

Cost of implementing the proposal

The total cost of refunding unused tax credits to individuals satisfying all of the criteria mentioned in this proposal was estimated at €140m.

At the time of the study, it was estimated that:

Once adopted, a system of refundable tax credits as proposed in this study would result in all future changes in tax credits being equally experienced by all employees in Irish society. Such a reform would mark a significant step in the direction of building a fairer taxation system and represent a fairer way for Irish society to allocate its resources.