Unemployment crisis set to continue through 2012 and beyond

Ireland’s unemployment crisis remains the striking feature of the current recession.   Despite this, in Budget 2012 and in the months since the Budget was annnounced, Government has taken hardly any steps to address this crisis and begin the process of seriously tackling the socially unsustainable number of workers who are trapped in unemployment. 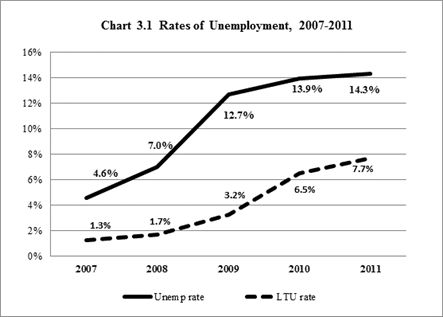 Data from the Live Register captures a broader definition of those unemployed, underemployed or entitled to sign-on for PRSI credits and reached more than 430,000 people in recent months.

Based on Budget documentation projections provided by the Department of Finance, unemployment will marginally decrease in 2012 - driven by emigration, as employment is set to fall in 2012 as we have seen already. In 2012 the Government’s forecast is that 14.1% of the labour force will be unemployed. It is clear that unemployment is set to remain at the very high levels to which it climbed over the period from 2007 to 2010 (see chart 4).

Of equally grave concern is Government’s forecast that unemployment will still be over 10% of the labour force in 2015 if everything else goes according to plan. In effect, it appears that Ireland is set to have very high levels of unemployment long after the current fiscal crisis has passed. This is a totally unacceptable situation.

It is clear the troika’s message that unemployment must be reduced so that the vulnerable can be protected is not being heard.

Social Justice Ireland has continually called on Government to begin to take this crisis seriously and we regret that Budget 2012 failed to do so. As we detailed in our pre-budget Policy Briefing and in our discussions with Government leading up to the Budget, and as we outlined to the troika in our meetings throughout 2011 and again in this paper, there is a key need for policies to rejuvenate the domestic economy.

There is also a need to recognise that further action is urgently required to reduce the numbers long-term unemployed even if there is no increase in the numbers of jobs available in 2012.

Social Justice Ireland has made a proposal on this issue to provide real part-time jobs for 100,000 unemployed people which we again present to the troika.

The early 1990s saw high unemployment levels in Ireland and little prospect of jobs being available for some time even though the economy was beginning to recover. Jobless growth was the reality.

A proposal made by the current Directors of Social Justice Ireland was formally adopted by the Irish Government and announced in Budget 1994.

The proposal sought to create real part-time jobs in the community and voluntary sector principally. Long-term unemployed people could access these jobs on a voluntary basis.

They were paid the going hourly rate for the job and they worked the number of hours required to earn the equivalent of their social welfare payment with a small top up.

The going rate for the job was agreed with the relevant trade unions and employers.

It created 1,000 part-time jobs in community and voluntary organisations in those pilot areas within six months of its establishment.

These jobs were sustained throughout the pilot period. More than 500 of the original participants took up full-time employment or education during those years and all were replaced by new participants.

This pilot programme was mainstreamed by Government in 1997.

Some years later it had melted away as such programmes should when the market economy had recovered and sufficient jobs were available for people.

It is clear that the market economy is unable to provide anywhere near to the number of jobs required to reduce unemployment anytime soon. Public policy should change so that:

1) It recognises that people have a right to work;

2) Unemployed people should not be forced to spend their lives doing nothing when jobs don’t exist; and

3) All meaningful work should be recognised.

Government should introduce a new programme to create real jobs paying at the going hourly rate for the job for 100,000 people who are currently long-term unemployed. Participation must be voluntary. It should be modelled on the Part- Time Job Opportunities Programme that was piloted in the period 1994-1998 outlined above.

• Paid at the going rate for the job;

• Jobs would be created in the public sector and the community and voluntary sector;

• Participants would be remunerated principally through the reallocation of social welfare payments.

• Working on these jobs participants would be allowed to take up other paid employment in their spare time without incurring loss of benefits and would be liable to tax in the normal way if their income was sufficient to bring them into the tax net.